Woody has been with Excel since our first trip in 1998! From Scotland, has looked after teams in all parts of Europe and is a season ticket holder at St. Johnstone FC! He holds a UEFA ‘B’ level coaching license and has coached numerous football clubs in Scotland, including a semi-professional club based near his hometown of Perth, Scotland. He was also a semi-professional player for sixteen years, scoring numerous goals as a striker with various clubs. Woody is by far our most experienced staff member. He has led youth, ODP and college teams through Scotland, England, Spain, France, Germany, Italy, Holland and Sweden. 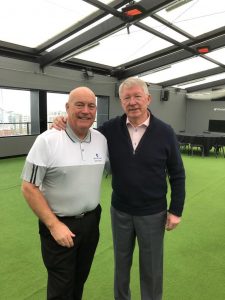 You’ve been a part of the organization since 1998. How did you and Eric McAleer meet?
I first met Eric in the Summer of 1995. We had both been invited out to America to coach soccer camps. That summer we ended up sharing a room in the apartment provided for us, and it became pretty obvious that we shared a lot more in common than our love for the game.

What stands out to you most about the early days with Excel Sports?
In the early days Eric and I pretty much done everything, we drove the mini buses, we did the laundry, we had Eric’s mother making packed lunches, coached the groups, managed their games and were the social conveners for the duration of the trip.

We involved everyone and made time for everyone, we had fun and the participants had fun.

I believe that it was being so personable and approachable that made the company the best in sports travel, and these are the biggest attributes that we still look for when recruiting any new tour directors today.

What, in your opinion, is unique about American soccer players?
We have to remember that soccer in the US is still a very young sport. I remember first coaching in the US in 1994 and you could hardly find a soccer field.

But from my first encounter with players in the US, I have always been impressed with their hunger for knowledge and how they can improve their game.

When we organise professional coaching sessions for our visiting groups, that is still the feedback I get back from the coaches.

As a Tour Director, you’ve seen a lot of groups over the years. If you could put together the ultimate soccer tour, with a blank check and no concern for money or access, what would it look like?
This is a great question. Working with WorldStrides Sports, I have been privileged to travel to some of the biggest hotbeds of soccer across Europe.

But for me, my tour would be split between two destinations: Barcelona in Spain, and the northwest of England.

Barcelona has everything in a city: it has the architecture, culture, food, beach, mountains, weather and, of course, soccer. Being in a full Camp Nou is an experience never to be forgotten.

From the sunshine of Barcelona to the northwest of England, whether we stay in Manchester or Liverpool, in both cities, football is not just football. It is religion. And for any soccer player to get the opportunity to play in this part of the world is an experience never forgotten.

I have been in the stadiums of Everton, Liverpool, Manchester United, and Manchester City and the atmosphere is electric. I have felt the hairs on the back of my neck rising as the Liverpool fans sang their anthem “You will never walk alone”.