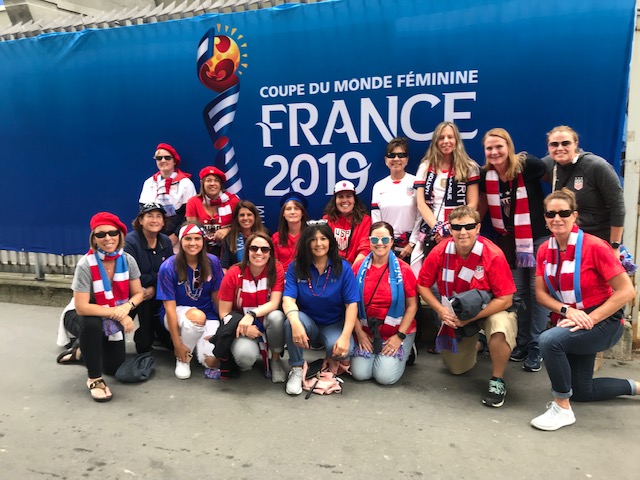 What do you like most about your job?
I thoroughly enjoyed the daily challenge of meeting my groups’ expectations by replying to their requests and wishes before they could even ask. I like surprising the group with wishes they thought would have been impossible due to logistic matters or availability. I take note of the fine detail with regard to the nature of the group. I do research before they come, to find out where they come from, what is specific about where they are from, the club and its history, ranking and achievements. I memorize groups’ names as soon as possible.

Tell us a bit about your professional background – what led you to your role as a Tour Director?
I started off studying hotel management in Germany and worked at the Munich Park Hilton Hotel. I learned all about customer relations, satisfying the simplest to the most difficult requests. It’s all about being up close and personal, yet keeping very discrete and knowing one’s place, anticipating situations and then reacting upon them. Never to let on that you are paddling for dear life down under, while the water is all still and calm where the client is. Unfortunately, circumstances had it that I was not able to follow the tourism field. I worked in an international logistics company in both Germany and France for 4 years and then in an international aeronautical company in France for over 12 years. My interaction with people from all walks of life in these industries taught me how to adapt to different work codes, cultures and traditions. I longed for a change and to broaden my horizons until I was asked to accompany sports teams. I left my office job and took on the job as a tour director and have had several incredible experiences since. Traveling and spending time with groups also allows me travel and to learn more about the country my group is from. I take along each lesson in experiences to each new group.

What do you see in American soccer players that strikes you as unique?
So far I have only traveled with female soccer players from the US and I remain impressed by the approach the staff has with regard to the sport and what it could bring to young girls and older female players. Commonly a sport for boys and men, it strikes me as there is much more to it than just a girl kicking a ball. The sport offers voice, personal growth, and empowerment to young girls and women. About soccer in the US, I find it unique that the young players can train in a school team, in a club team and also have a personal trainer. This is something I have not heard of anywhere else.

What do you think American soccer players realize about the sport once they’ve seen it in another country?
I have been told that most American players realize that the rest of the world is engulfed in soccer. That it is everywhere and everyone talks a soccer language and possibly sees a future in it.

If you could put together a dream international soccer tour, with an unlimited budget, for yourself and your friends/family, where would you go and what would you make sure to include?
I would like to be able to put together a team of 16 players from all over the world with one player from a chosen country such as the US, Brazil, Argentina, Paraguay, UK, Germany, France, Spain, Italy, Nigeria, and South Africa. (Players from NZ, CH and AUS are too far out.) I was fortunate to be a team liaison officer for the German National Team during the 2018 World Cup and it left me strong memories and I gathered so much experience from this one event.

I would have local substitute players in each country join the team. My international female soccer team of 16 players would travel to the countries they have been chosen from. They would attend training sessions and participate in workshops with local clubs. They would play one friendly match and would act as global ambassadors in each country. Each theme would be based on the country they would be visiting. This would shine light on female soccer, as they still remain in the shadow of male players. We will inform the local media and have the entire adventure covered on Instagram. In addition to bigger international sponsors, I would seek out one company in each country to follow the team giving them exposure. It would be a company which has suffered due to the 2020 COVID pandemic. I would love for young girls to know that they have their place on a soccer field. In many countries sport is often the only way for girls or women to express themselves.

Any additional anecdotes or stories that you’d like to share about your experience as a Tour Director?
I once had a tour group from South Africa. It was during a time when the farmers were striking all over France. We were not able to get to the game on time and it was canceled. I had to come up with a plan real fast to compensate for this mishap. I made a few calls and managed to drive the group to a very popular club at their facilities. The initial idea was to tour their facility and learn about their club. The professional players were about to leave for a training camp, but when they heard of my group visiting they came over and met with the young players. The jaws dropped and the boys could hardly believe their luck, meeting and shaking hands and exchanging with the professional players they have only seen on the television before. I was very happy that my quick reaction solved a problem in such a pleasant way. We left the club with many good memories.

The Women’s World Cup is 199 days away, and I’m excited! France is a fantastic soccer country, has a wonderful and unique culture – and they will do a fantastic job of hosting the event. USA have qualified, they will be one of the strong favorites, and have some of the best female players in the world hitting the prime of their career. Selfishly, I’m also excited as my home country – Scotland- has qualified for their first ever major women’s tournament and has some awesome young players playing at the best clubs in the world. They also have a very impressive head coach, Shelly Kerr, who is a fantastic leader and I fully expect her to push her team to great heights. We have many teams visiting the 2019 World Cup and I’m sure they will all leave with lasting life-long memories of a beautiful country and a wonderful event. I will be there with my tartan scarf and my “Braveheart” painted face! I hope to see you there!

Who will you be rooting for? We asked our office staff who they want to win. Check out their thoughts.